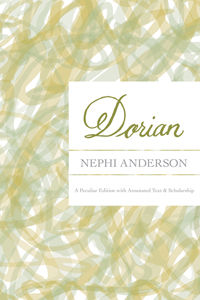 Please note: When purchasing on Amazon, make sure the edition you buy has the full title.

Additionally, the hardback is available, but only by special request at this time. Please use the contact form to purchase.

DORIAN TRENT is a young man with a head full of conflicting ideas. His mentor thinks Dorian will uncover the ultimate resolution between science and religion, but who will resolve his own confusion when it comes to Mildred and Carlia?

This Peculiar Edition combines the original 1921 novel with excerpts from Anderson’s original typescript, fresh critical analysis of the novel, new notes on the text for the modern reader, and much more.

Celebrate this valedictory accomplishment of one of America’s great lost novelists—and the grandfather of Mormon literature—by joining Dorian on his journey through philosophy, theology, romance, pain, struggle—and just the right amount of resolution.

Shortlisted for the 2015 AML Award for Criticism.

Whether returning to Anderson or meeting him for the first time, this Peculiar Edition is a journey into new levels of artistry and complexity—as well as a great yarn for a fireside read.

THIS IS NOT A PHOTOGRAPH by Jacob Bender Nephi Anderson’s DORIAN as a Sort of LDS SONS AND LOVERS; or A PORTRAIT OF THE MORMON SOLIPSIST AS A YOUNG MAN

THE DEAD VIRGIN AND THE ACCIDENTAL WHORE by A. Arwen Taylor

“WHY ARE THERE CLASSES AMONG MEMBERS OF OUR CHURCH?” by Sarah C. Reed Anderson’s Economics of Mormonism in Transition

A PLEA FOR FICTION by Nephi Anderson Originally Published In THE IMPROVEMENT ERA Volume One, Number Three, January 1898